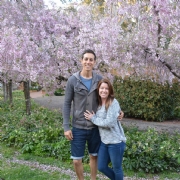 It all unfolded under the weeping cherries.

We are still wiping the tears from our eyes after a romantic beau chose Wildwood to pop the question!

The former Queensland couple (now living in Newcastle) had the garden to themselves when Andreas asked Natalie to marry him. Andreas had rung us to time his proposal with the flowering of the cherries and he timed it just right on September 18 (see photo right).